What on Earth is Information (I) – An Encounter with Bach

[This is #1 in a series of posts exploring information: what is it, where does it come from, and what does it teach us about ourselves and the reality in which we live.]

You may want to listen to the above while you read this post!

The year is 1720. Johann Sebastien Bach sits in his study in the Eastern-German city of Kothen. Harmonious sequences of notes well up in his mind, resounding around his imagination. The composer weighs and compares a multitude of possibilities; he switches phrases and notes, turning each sentence of sound over in his mind, considering, weighing, freely arranging and rearranging.

As each phrase becomes concrete in his mind’s ear, his hand glides over a paper manuscript lying on the desk. As the quill flits up and down, a stream of notes, rests, and incidentals is transferred from his imagination to a sequence of marks on a stave. The symbols are silent, but their pattern represents the complex melody welling up his mind; stationary dots and dashes encoding a dynamic sentence of sound. 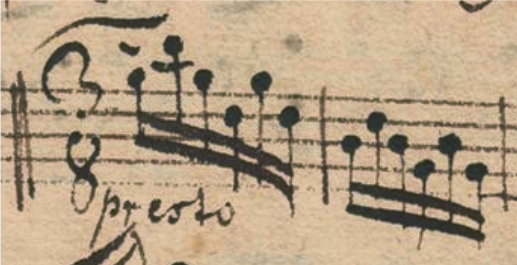 Figure 1 – an excerpt from the 4th movement of Bach’s autograph copy of the Sonata No. 1 in G minor

Eventually, Bach’s working and reworking is done. The imaginative expression is finished. He sits back, the ink still wet on the paper. The Sonata No. 1 in G minor sits represented on the page. Bach scans each phrase, sight-reading in his mind. Yes, the sequence of pitches and rests on the page faithfully mirrors the music in his imagination. The work is finished. The manuscript is carefully folded into an envelope.

Across town, a printer opens the envelope and reads Bach’s hand-written pages. Sunlight streaming through a window strikes the ink of the pen marks on the paper. As the light strikes the page, photons of pure energy stream through space towards the printer’s eyes. The different wavelengths of the beam of light carry a representation of the manuscript across the empty space between page and pupil. The printer’s retina and brain, operating in harmony, convert the complex pattern of light back into coherent notes in the printer’s consciousness. To represent each note and rest, an engraved printing block is picked out. One by one, a whole page of blocks is carefully arranged into the press, forming precisely the right sequence of symbols to faithfully reproduce the score of Bach’s autograph manuscript.

As the press is worked by the printer’s hands, patterns of ink from the arrangement of blocks are stamped onto a fresh pages. The ink signs and their spacings are neater than those of Bach’s handwritten original, but the sequence of notes and time values they represent is identical to the sequence in his mind. The printer scans between the handwritten and printed copies, checking for errors. There are none. The pages of the score are bound and deposited in a library, where they sit, only occasionally seen for the next 300 years.

Figure 2 – a formalised version of the same excerpt shown in Figure 1.

In the present day, a librarian takes each page of the fragile printed manuscript and digitises it using an electronic scanner. The 300 year old ink marks on the printed page are transcribed to photons of energy and signals of electrical current, processed by a computer processor, and stored as a digital manuscript on a hard drive. The information of the digital manuscript sits as a pattern of magnetic charges on the digital memory, encoded as millions of ‘ones’ and ’zeroes’ – a vast string of binary values. Though the binary sequence looks nothing like the original score, a computer can faithfully reproduce from it a human-readable version.

Ahead of a performance at the Royal Albert Hall, the digital file storing the score is emailed out to the musicians of the Royal Philharmonic Orchestra. The information from the hard drive streams backwards and forwards from a satellite hanging in the void of space. The score, now represented as a sequence of millions of ones and zeros, traverses the vast distance as a beam of radio-frequency energy, arriving at a multitude of PCs, tablets and smartphones.

In London, the principal violinist of the Royal Philharmonic Orchestra sits at the desk of her home office. She opens the digital manuscript from her email, and hits ‘print’. Her computer transfers the digital file to a printer, where once again the score is expressed as recognisable notes in ink on paper. The violinist files the paper score into her bag, and makes her way to the Royal Albert Hall.

Seated on the stage, the violinist opens her score. She places it on a stand, where the gentle glow of an LED lamp bathes the page. The photons from the lamp excite the atoms of the ink and paper, causing secondary photons of different wavelengths to stream from them. A complex pattern of light passes the gap from page to eye as a beam of pure electromagnetic energy. At the violinists’s retina, the light energy is converted to a series of electrical signals. Travelling to her brain, the signals are decoded into impressions of signs in her mind. The image of symbols on the stave induces a cognition of notes, each note encoding a pitch held for a specific time, each pitch corresponding to a specific finger at a specific position on a specific string of the violin.

The concert begins. The violinist’s arms, wrists and fingers relay the opening notes to the correct configurations of finger and string on the fretboard. At the violinist’s bidding, kinetic energy passes from arm to bow to strings. The strings vibrate, prompting the surrounding air to resonate in answer. Complex waves of pressure in the air spread out into the cavernous space, and the opening phrase of the 4th movement of the Sonata No. 1 in G minor emanates to the ears of the audience, pure and sweet. As the violinist’s eye scans the page, well-trained fingers unconsciously respond. A sequence of sound first imagined three centuries before is seamlessly transmitted to the minds of five thousand rapt listeners.

And so the Sonata traverses time, space and form. It spans hundreds of years and hundreds of miles, from Bach’s study in 18th Century Kothen to the Albert Hall in 21st Century London. It spans the minds of composer, printer, musician and audience. It spans form: from imaginative thought, to electrical impulses in nerves, to ink on paper, to energy traversing space, to patterns of fingers in motion, to vibrations of strings, to pressure waves in air, to the mystery of emotive response in the hearer’s imagination. Across this cascade of transitioning forms, barriers of time and space are demolished, and an audience of thousands bathes in the immortal music of Bach’s brilliant mind.

But what, most fundamentally, is the music of Bach? What kind of thing is it, this shapeshifting and apparently immortal sonic communique? How does it glide like quicksilver through forms and across vast distances of space and time, before striking home in the deepest levels of human consciousness?

Music is certainly real, a tangible feature of this universe in which we live. When we think about what the universe most fundamentally consists of, we usually think of matter and energy, space and time. Thus, at first glance, perhaps music is simply a byproduct of matter and energy? After all, a piece of music can certainly be encoded in ink on a page; stored as matter, as stuff. Music can also clearly be transmitted by light or radio waves, by sound waves or electrical signals; transmitted in the form of energy.

But to reduce what music most deeply consists of to either energy or matter is to make a category mistake. It is to mistake identity with representation; to mistake essence with appearance; to mistake what a thing is with how it appears to us.

This is because the fundamental content of the musical sequence is separate from any of the forms used to represent or transmit it. Though the opening notes of Bach’s Sonata  “G,B♭,G,D,G,D” can be represented or communicated using a sequence of quill marks, a sequence of printed ink marks, a beam of light, a sequence of radio-frequency signals, a thought, a series of finger patterns, a sequence of ones and zeroes, or a sequence of vibrational frequencies in air; none of these are themselves the Sonata. 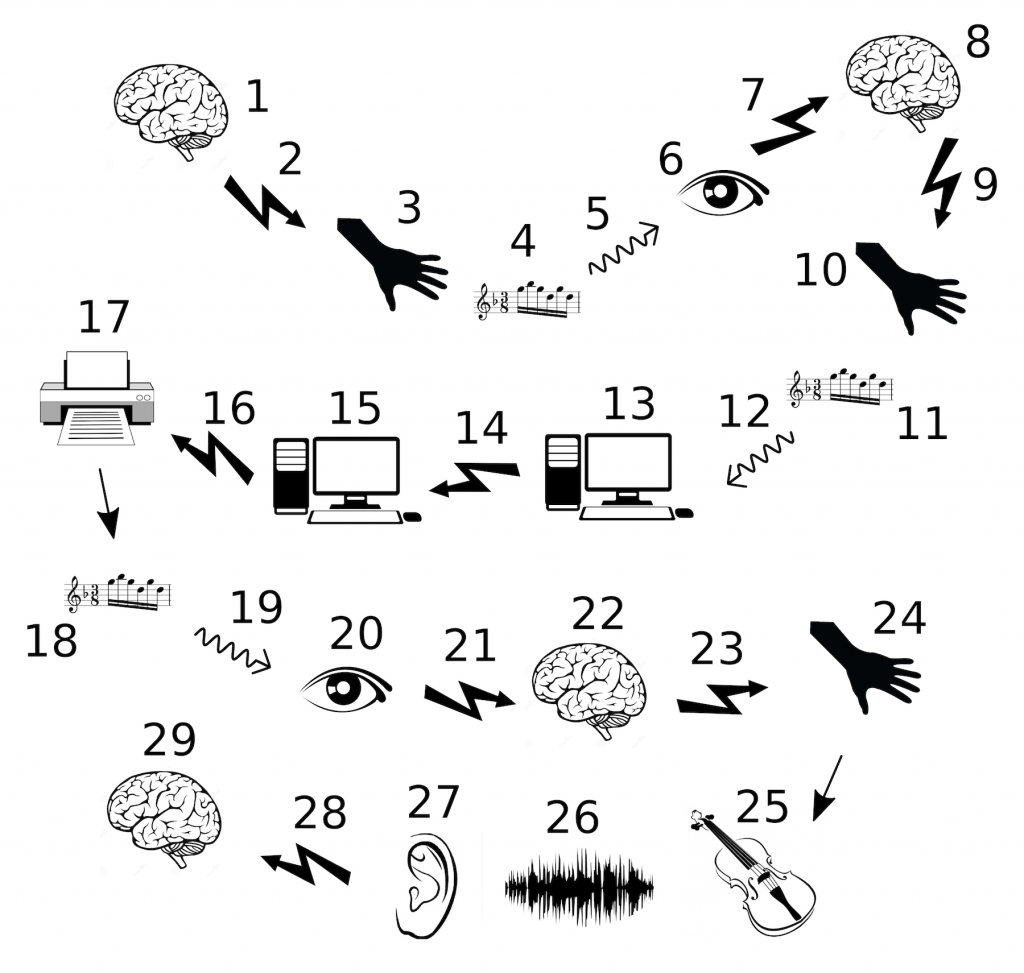 Figure 3 – from Bach’s mind to the  mind of the listener in the concert hall, the Sonata transforms at least 29 times, between different forms of representation and transmission: across electrical signals, pressure waves, kinetic energy, configurations of ink on paper, magnetic charges, and more.

Figure 3 shows the sheer number of transformations of form spanning the journey of the Sonata from 18th Century Kothen to the 21st Century Albert Hall, highlighting quite how independent the music itself is of any single one of these representations. After all, ink on a page is not itself music, it simply represents it. The energy of sound or light or radio waves is not itself music, it simply transmits it.

So what is this deeper entity? What is this harmonious quicksilver capable of transcending both matter and energy?

The representations of information, whether in the form of ink, paper, photons, electrical signals, radio waves of any of the other forms seen in Figure 3, are simply receptacles; they can reveal or transmit information, but the information itself transcends their individual limitations. Thus, there appears to be a priority of information to its representations in matter and energy; it is altogether more fundamental a kind of thing.

So if information does not ultimately depend on matter or energy, what kind of thing is it? How do we account for something that appears to be in a unique category all by itself?

We can frame this question by considering issues of both essence and origin:

These matters are deep ones, central to our very being. Information is central not only to our deepest forms of artistic expression and our ability to conduct scientific exploration, but it is intricately woven into our very flesh. After all, every cell of our bodies houses an extraordinary mechanism driven by information – the text of our DNA.

In the following posts, we will explore different facets of the character of information, seeking to illuminate through them these deeper questions of being.